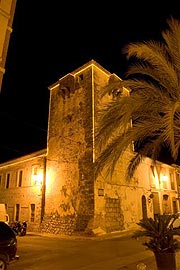 More information relating to this period are explaining how he dismembered the rectory Denia for which will be based in their own parish Verger. Roque Chabás and Mossén Alaun this date made in 1534, and John J.Garcia Ribes and his article “The dismemberment of Denia and challenged the foundation of the parish of El Verger” in date from 1541. In this article includes the original text file that is in the Kingdom of Valencia (Section clergy, libro 1501, p. 21) which describes under what conditions is carried out dismemberment and the creation of this parish “Item six ordered them Lloch Verger, Miraflor, Mirarrosa and Cella, who sien dismembered from the rectory of Denia and the Church of said Lloch Verger be erected in parsonage church parish to which they are anexionats fingers Lloch and rectory rectory either this Sunday and forced the parties say two masses, one in the Orchard and the other in Mirarrosa and support the said rectory and the rector of that applied to him sien thirty pounds in the old lava tithes fingers which have contributed to the three provosts mountains ArtIcons Xativa receiving tithes in Lloch fingers, except the Archbishop of reverendisim Señor which is applied to the small money of the Valencia, bread Harvesters all Saints …… also olim mosques finger Lloch serveisca factory for you ornaments of those respective churches for divine worship that does not come at least. “